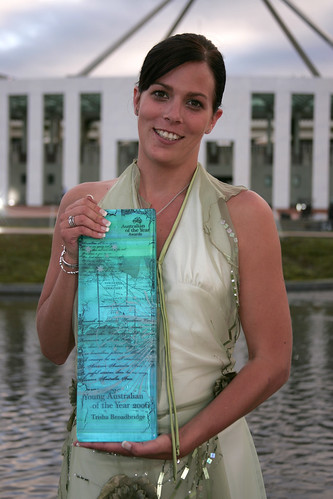 Trisha Broadbridge lost her way as a teenager and left school at seventeen, but she got her life back on track by attending a youth camp run by the Reach Foundation. She returned to school and subsequently completed an arts degree at La Trobe University. In 2002 she became an accredited facilitator with the Reach Foundation and began leading educational workshops and camps designed to inspire teenagers and boost their self-esteem.

Two years later Trisha married AFL footballer Troy Broadbridge, but tragically lost her husband to the 2004 Asian Tsunami while honeymooning in Thailand. Broadbridge returned to Thailand two months later and resolved to do something to help the local residents, honour the memory of her husband and move forward in her own grief. She established the charitable Reach Broadbridge Fund and with the help of Troy’s Melbourne Football Club teammates built the $240,000 Broadbridge Education Centre on Thailand’s Phi Phi Island.