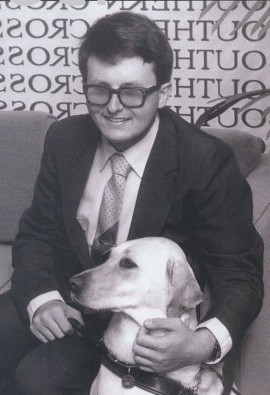 Born in Bermagui, New South Wales, Michael Waldock lost his sight as an adolescent. When he was twelve years old he was taught mobility through the use of a cane, but his vision deteriorated further and he became a recluse. The Guide Dogs Association usually only worked with adults, but made a special exception for fourteen-year-old Michael, whose guide dog Robbie helped transform his life. Waldock was given a CB radio for his sixteenth birthday and began working for the Australian Volunteer Coast Guard. He tirelessly monitored radio signals for 15 hours each day and contributed to 160 sea rescues within 30 months. Waldock alerted authorities to distress calls from yachts and cargo ships and during one three day period 17 lives were saved.

Accepting his Young Australian of the Year award, Waldock paid tribute to volunteers around the country, hoping his award would inspire young people to help others regardless of their own particular difficulties.