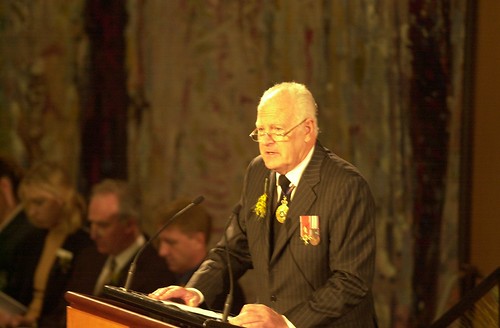 Born in Adelaide and raised in Melbourne, Peter Hollingworth was ordained a priest in the Anglican Church in 1960. In 1964 he became Chaplain of the welfare agency the Brotherhood of St Laurence; he subsequently completed a Masters Degree in Social Work and was appointed Executive Director of the Brotherhood in 1980. Hollingworth was an often outspoken critic of government welfare policy and argued that ‘poverty should be looked at in terms of the structure of society rather than the individual case.’ In 1989 he was appointed Anglican Archbishop of Brisbane, in which position he continued to pursue his welfare agenda and supported the ordination of female priests.

Named Australian of the Year for 1991, Hollingworth was described as ‘Australia’s foremost spokesman for social justice.’ During his tour of honour he criticised government policy on Aboriginal welfare and youth unemployment. Hollingworth was Governor General of Australia from 2001 to 2003.